He’s captivated us with dark and whimsical scenery, made our skin crawl with creepy characters and won our hearts with rich storytelling. Tim Burton is arguably the king of Halloween. His creations are celebrated by many, even though they tend to be very dark and brooding. You can bring his most famous characters and scenes to life with printable pumpkin carving patterns! The following 5 designs will put a Tim Burton twist on your fall holiday festivities.

Jack Skellington is the sharply dressed protagonist of the famous Tim Burton film The Nightmare Before Christmas. His skull head is very similar in shape to the traditional pumpkin. Our Jack Skellington pumpkin pattern captures all the delightful details that appear on his grinning face, right down to the tooth lines and furrowed brow. Jack o Lantern patterns look great as-is but you can always add a little more detail with paint. A layer of white paint goes well with this Tim Burton design. Our Jack pumpkin stencil is a clever level project (2/5 difficulty rating) so it’s not a bad choice for unseasoned carvers. 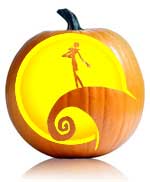 Alice in Wonderland is a hugely popular children’s story that has been revisited many times. The most well-known recent version is Tim Burton’s take which was released in 2010. The eerie yet enchanting style works exceptionally well as Alice’s journey unfolds. Our Cheshire Cat pumpkin patterns feature this unusual feline’s face up close and in the style of Burton. He has big eyes and an exceptionally long row of round teeth. This design also ranks as a 2/5.

While there are many memorable moments in The Nightmare Before Christmas, few are as iconic as the scene with jack making his way down the unfurling hillside. Our Nightmare Before Christmas pumpkin stencil showcases this image just as it is often featured on movie posters and DVD or Blu-Ray covers. This design involves more intricate patterns, ranking it as an intermediate level project (3/5 difficulty rating) so you may want to prepare a practice pumpkin or set aside extra time to carve if you are a novice Jack o Lantern maker.

Carve with the Headless Horseman

The Headless Horseman is an infamous figure in Halloween lore. His tale has been told again and again, appearing as a theme as far back as the Middle Ages. He continues to live on today in the old stories and in newer versions, including Tim Burton’s 1999 adaptation. Our Headless Horseman pumpkin stencil recreates this timeless figure just as he is depicted in Burton’s movie. The horseman rides under a creepy tree, presenting a good level of challenge for experienced Jack o Lantern carvers. This project comes with a 4/5 difficulty rating.

Bring Pets to Life for Halloween

Frankenweenie brought us a Tim Burton tale that pet owners can relate to – to some degree anyway. Anyone who has lost a beloved furry friend often goes through moments when they wish they could bring him or her back to life. Frankenweenie combines that desire with a Frankenstein theme – a great combination for Halloween! Our Frankenweenie pumpkin stencil features Sparky’s face up close with excellent detail, right down to the stitching. This design presents significant challenge with a rating that falls between a 4/5 and 5/5 difficulty level. 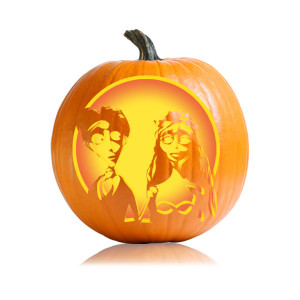 The Corpse Bride in Pumpkin

First Tim Burton brought us the lovely, sewn-together Sally. She was kind hearted, considerate and beautiful in her own piecemeal way. Then 12 years later he created Corpse Bride. This endearing animated film it also a great source of inspiration when coming up with pumpkin templates. Our Corpse Bride pumpkin stencil features both bride and groom in an adorable portrait pose. Novices beware: this is as challenging as carving gets with a 5/5 difficulty rating! 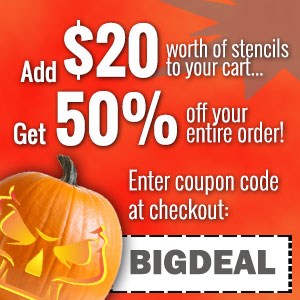